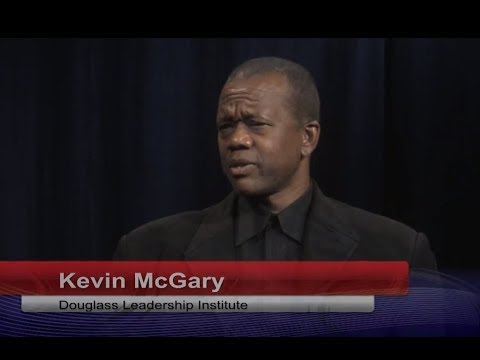 While many well-meaning liberals and progressives support Black Lives Matter, few realize that the official group is dedicated to dismantling the institution than help blacks more than any other.

The avowed Marxist organization sees the family as the product of “Western imperialism” and wants to rid society of it, according to its official mission statement. That doesn’t sit well with Kevin McGary, the longtime chairman of the Frederick Douglass Foundation of California, named for the famed abolitionist.

“McGary works closely with communities of color to keep the residents informed and empowered. And he has opinions and solutions the BLM activists don’t want you to hear,” said Drea Humphrey, a journalist with Rebel News.

“There’s a lot of things that supposedly the Black Lives Matter stands for that are really anti-black lives,” McGary said, citing the family issue, in a talk with Humphrey this week.

“In black life today, if you don’t have a father in the house, there is 70 percent more likelihood that the kids that grow up in that household will succumb to either poverty or crime,” he continued.

If Trump wins we get to start shooting back.

If he doesn’t, we will have to…

President Trump is the ONLY one that IS doing something, and he’s letting democrats show themselves for what they really are.

Agreed, it IS POTUS Trump who ‘got America BACK ON TRACK after the 8 long years of Obama, who deliberately tried to take ‘Arrogant(his words) America Down the Drain. With ALL the scandals and criminality of Obama and his Marxist Agenda, with his Puppet Master, Soros, leading the way… and STILL doing so, it WILL BE POTUS Trump who continues America’s Constitutional Rights for American Citizens that ‘protects us from Gov’t Oppression, as we saw Obama ‘Shred our Constitution on a daily basis.’

Vote Trump for jobs…Biden for mobs.

Democrats are going to steal it. Media will cover it up.

They’re sure going to TRY!

They are going to TRY to steal the 2020 election ,with their “Mail in Ballot Scheme and trying to KEEP people away from GOING to the polls to vote in person… Americans voted during TWO WARS…. this is ALL about Democrat Corruption and Trump needs to ‘put together Hundreds of Teams to “VERIFY ALL BALLOTS AND RECOUNT, AS WE KNOW DEMS HAVE BEEN ‘HARVESTING REGISTRATIONS FROM PRISONERS, ILLEGALS, ETC. AND WILL HAVE FOREIGNERS SENDING IN BALLOTS AS WELL…… THE TEAMS CAN VERIFY ALL VOTES as we KNOW, they are going to try to STEAL the 2020 away from POTUS Trump… Read more »

They keep telling us what they are doing while we sit back and do nothing.