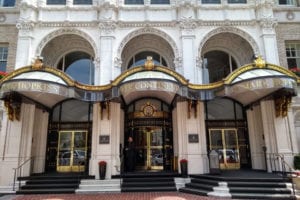 San Francisco, Calif. — An interesting development since the Covid lockdowns in the City on the Bay has been the clandestine placement of homeless people in luxury hotels, such as the Intercontinental Mark Hopkins on Nob Hill.

As it turns out, the government is using unlikely public employees who otherwise would have been furloughed to serve as vice couriers for them.

One such city staffer, for example, was a curator with the San Francisco city museums before the shut down, said an informed city source who requested anonymity.

“Being the museums were closed, [this person] would stay on the payroll as a ‘runner,’ delivering meals, liquor, weed and cigarettes to the homeless in their hotels,” he said.

Before starting this work, the staffer had to sign a non-disclosure statement agreeing not to divulge this unexpected change in job duties.

Unfortunately, for the Mark Hopkins and other upscale hotels, such as the Palace Hotel, people are starting to take notice of the unsavory guests in the rooms.

“They’re letting homeless drug addicts stay at this four star property under Project Roomkey. Please be aware,” warned one TripAdvisor reviewer about the Hopkins. “There are fights, overdoses, dirty rooms.”

As noted earlier in a Press California exclusive, some of the Hopkins guests were inmates released due to Covid who arrived in a jail bus.

So lazy they wont even get their own dope SOB

How the devil do I find a furloughed museum staffer for supporting my illegal addictions and nefarious activities?    There are times I would kill for a McRib sandwich.

Mention of the McRib makes this comment automatically the best of the week.

Hard to believe bums at The Mark Hopkins .. had a Christmas party there when I was trading on the Pacific Stock Exchange long ago.. very posh .. San Francisco has all but died, and I’m a native, though I no longer live in the City. Henry Chung of Hunan restaurant was a wonderful guy and his food was unparalleled, God be merciful to him. I definitely left part of my heart in San Francisco, but it largely sickens me today… I never go there..

This is how civilizations die.

If bums can shit on the sidewalks will they wipe their butts on the floors like a poodle with dingleballs?

Those rooms will need special cleaning. If there was drug making, etc. those rooms are considered a hazardous site. That was a beautiful hotel. I would never stay in any of those properties now.

Hi….room service? I’d like to order some things…an extra large pepperoni, mushroom, anchovie pizza, a carton of Marlboros….a case of Anchor Steam, and a case of Johnny Walker Blue. Oh…almost forgot…a couple ounces of primo weed. Charge it to my room account at city hall. Half an hour? Great. Bye.

My prediction…. When the COVID mess is over with it will be impossible to remove these people from the hotels. They’ll scream that the hotel is now their “legal residence” and that they can’t be evicted or removed from it.

What makes you think this Covid mess will ever be over …

It’ll be over when Fauci & Gates decide they’ve milked it enough $$$$$ from it.

expanding the definition of “public servant”

It will be funny when the feds bust them as couriers.

So what kind of person would agree to do this? Only another brain-dead liberal .

California became a shithole when the leftists took over…..

The San Francisco treat. I guess this is their way of providing income for the tourism industry by renting hotel rooms. Problem is when this ends, and it will, Frisco will still be rife with the same problems they have now.
Tourism is done, unless homeless drug addicts and piles of feces in your vacation photos is your thing. That’s an import of a whole other problem.

The hotels will be rife with bed bugs and whatever other kind of pestilence these “guests” carry.

Let me get this straight: The State is emptying its prisons and putting (now) ex-cons in luxury hotels at taxpayer expense. Meanwhile, the same State is telling law abiding citizens to stay locked up in their homes for the foreseeable future.

P.S. Here’s the thread cited on TripAdvisor, which might be buried in a site search:
https://www.tripadvisor.com/ShowTopic-g60713-i30-k13330724-BEWARE_of_InterContinental_Mark_Hopkins_San_Francisco-San_Francisco_California.html

Double standards EVERYWHERE! One rule for the little people, another for the elite. Look at the headline from earlier re: LA Sherriff congregating at a bar when bars are supposed to be shut down. I’ve lost so much respect for our local governments and bueraucrats over the past few months. They tell you one thing and do the exact opposite right in front of your face.

Yep–they’re having a ball taunting you. No pleasure otherwise.