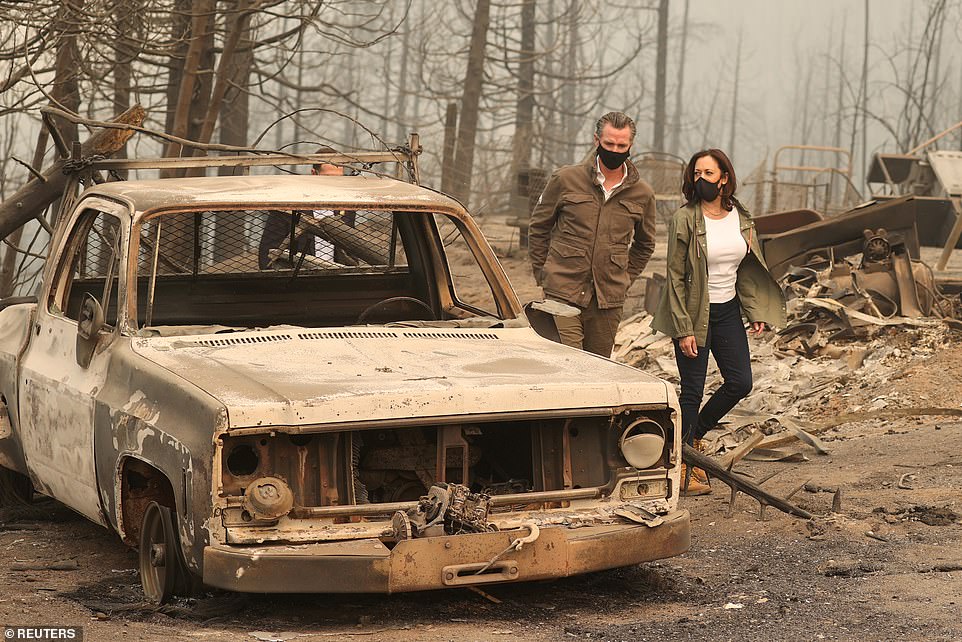 A family who lost their Fresno area home in the Creek Fire said Gov. Gavin Newsom and vice presidential candidate Kamala Harris went on their property without permission.

Newsom and Harris, in Fresno County to see areas ravaged by the fire, toured the Pine Ridge Elementary School on Tuesday when they crossed the road to walk around the destroyed house.

“Those chimneys, they remind me – when you look at a neighborhood that’s been wiped out, those chimneys remind me of tombstones,” remarked Harris.

The homeowners, not enthused that Harris used the ashes of their property as a backdrop for the press, said neither she nor Newsom had the right to be there.

‘They used my parents’ loss’

“What has me really frustrated right now is the fact that these two politicians used my parents’ loss for a photo opportunity to push their political agenda,” said Trampas Patten.

“Decent human beings that have character and class, wouldn’t air someone else’s misfortune on national television!” Trampas posted on Facebook.

He said his parents never gave the Democratic duo permission to go on their property in Auberry, a rural community of 2,000 east of Fresno in the Sierra foothills.

Bailee Patten, Trampas’ sister, said the family hasn’t been allowed to go the property because an evacuation order remains in effect for the neighborhood. She was stunned when she saw Newsom and Harris there.

Family not allowed to visit

“This isn’t just devastation, this is our lives. This is where we grew up, these are our memories. And to not have that – to feel so helpless – and I guess that’s what we’ve all been thinking, is that we were so helpless,” Patten said on Facebook.

“Because we weren’t there, we haven’t gotten to deal with our loss. Instead, we’re having to watch it play out on social media and news.”

The masked Senator had this to say as she walked around the premises:

“It is incumbent on us, in terms of the leadership of our nation, to take seriously the extreme changes in our climate,” she waxed. “These are the stories behind these fires.”

She didn’t seem interested in this family’s story. Neither she nor Newsom contacted any of them to see if they needed assistance, Patten said.

For more unusual West Coast news, check out our home page at https://presscalifornia.com.

No surprise here. These empty meat sacks never see the “commoners”, they just float from one fundraiser to another.

this is who they are they use our misery and loss for their political advantage… They are the death cult Why do those in CA vote for people like this are they that shallow?????

Press charges against Both of Them????
As Nancy Pelosi says “NO ONE IS ABOVE THE LAW”
Let’s put it to a Test!!!!
and Every Person that set foot on their property without the Owners consent!!!!!

I wonder if she offered him some lip service…

Get used to it. The election is rigged.

Kamala's kneepads
Reply to  Defund the Left- Cancel your Pay-TV

It’s much worse than that. The groundwork is being laid for permanent one-party rule in America.

We’ll have a Civil War first
We the 3%ers will have a say before this over!!!!

Its called Pine Ridge Elementary folks and to the Trampas we are so sorry for the loss of your home. Please post if there is a go fund me set up yet to help restore your lives

Fixed. Will update if we find a GFM page.

Democrats never even consider that they should obey the law like everybody else. Keep voting Dem, California, and your state will continue to go down.

No shock here. What a pair.

What BS. The owners of the property cannot even go there, but newson and harris are there?

And they actually have the nerve to flog phony climate change on top of this outrageous intrusion, stomping all over people’s lives and memories on private property. They both played a large role in causing this devastation if you ask me — with their wacky ideas, policies, and neglect.