WSJ: Power outage is the last straw for some fed-up Californians 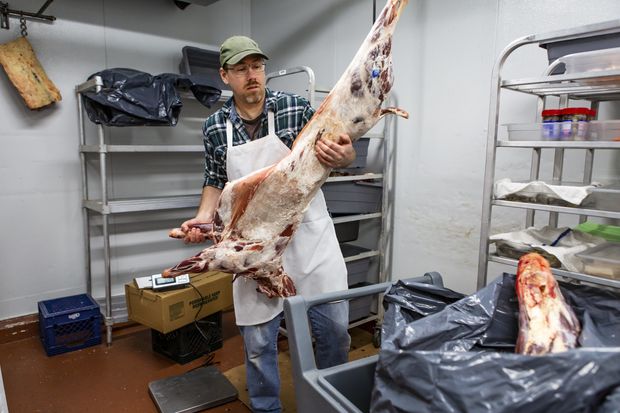 Power cut may be just the beginning for beleaguered state

From the Wall Street Journal

EUREKA, Calif.—Melanie Bettenhausen was learning to live with the devastating wildfires that periodically sweep through Northern California, but she isn’t sure she can endure the alternative offered by PG&E Corp.: mass blackouts.

Last year, a fire caused by a PG&E transmission line swept through Paradise, Calif., destroying her childhood home. Though she had already moved away and was running the North Coast Co-Op in this coastal town, her aunt was forced to flee the old family house.

On Wednesday, Ms. Bettenhausen’s life was disrupted again when PG&E cut the power to a vast swath of the state stretching from south of San Francisco almost to the Oregon border, explaining that high winds and dry brush made it too dangerous to run electricity through the company’s lines.

When she arrived Thursday morning, the walk-in refrigerator was full of spoiled dairy products. All of it—tens of thousands of dollars worth of food—would have to be thrown away.

“I don’t even know yet if we’re going to make it through this one,” she said. “Anyone looking at providing for their family and maintaining a living in this area has to be making plans.”

California residents have come face-to-face with an uncomfortable new reality: Large swaths of the state—by itself the fifth-largest economy in the world, and home to the globe’s most technologically advanced companies—may be subject to the sort of abrupt blackouts normally associated with underdeveloped countries.

The state’s three big investor-owned utilities now have regulatory permission to cut off power to parts of their service territories during strong winds to reduce the risk of their electric lines causing wildfires, after at least 21 blazes linked to utility equipment killed more than 100 people and burned tens of thousands of homes in recent years.

PG&E, the troubled utility that provides gas and electricity to more than 16 million people across 70,000 square miles of northern and central California, is a lightning rod for public anger. The company trails its peers in technology to track winds and isolate the areas where equipment is at highest risk of sparking fires.

It is also running far behind on several of its most important safety efforts, records show, including this year’s tree-trimming campaign, which is less than 50% complete.

“We are seeing the scale and scope of something that no state in the 21st century should experience,” Gov. Gavin Newsom said speaking Thursday in Mather, Calif. “What’s happened is unacceptable, and it has happened because of neglect.”

At a press conference Thursday, PG&E Chief Executive Bill Johnson said, “I do apologize for the hardship this has caused, but I think we made the right call on safety.”

Mr. Johnson, who was named CEO in April, also apologized for the frustration customers faced as they tried to find out whether they would lose power on a website that kept crashing and maps that were inconsistent. “We were not adequately prepared,” he said.

The company sought chapter 11 protection in January, citing more than $30 billion in potential liability costs tied to wildfires. If it is found liable for another major fire during bankruptcy, it would further threaten its efforts to put together a viable restructuring plan, already complicated as it seeks to pay fire victims, insurance companies and others.

Its shares plunged 27% when a bankruptcy judge last week opened the door for bondholders to present a competing plan to restructure the company.

Last week, PG&E became the only U.S. utility ever to have initiated a weather-related shut-off of such size and duration, affecting nearly 750,000 homes and businesses across 34 counties. By Sunday, PG&E said it had restored power to all customers hit by the blackouts.

There were 1,370 public schools serving 483,000 students in areas that lost power. More than 400 of them with 135,000 students closed their doors, sending children home to their parents with little warning, according to the Governor’s Office of Emergency Services.

Emergency rooms, agencies that provide drinking water and police departments were forced to use backup power supplies like generators to stay open. The power outage affected 248 hospitals and 304 police and fire agencies, the office said. The sick and infirm living at home, who rely on medical equipment powered by electricity, weren’t spared. Thirty thousand customers with potentially serious medical issues lost power, according to PG&E.

The economic costs are likely to be muted, at least for now. The first two days of the shut-off for PG&E’s residential and commercial customers could cost the state economy between $65 million and $2.5 billion, said Michael Wara, head of the climate- and energy-policy program at Stanford University’s Woods Institute.

He added that if the blackouts continue on for much longer the economic toll will mount, particularly if businesses feel this will be an endemic problem.

PG&E officials won’t say how often or how long Californians could face the prospect of blackouts like this one.

“I have been asked this question: Is this the new normal for us and our customers, for all California utilities and their customers, and actually for the entire West?” said Mr. Johnson.

“Our goal over time is to reduce wildfire risk further across the system to shut off power less frequently and to further minimize the impact of shut-offs.”

Even before the blackouts, PG&E was one of the most reviled institutions in Northern California. The utility’s aging gas pipelines were blamed for the 2010 explosion that destroyed a San Bruno neighborhood, killing eight and injuring 58.

It was a PG&E power line that sparked the deadliest wildfire in California history: the 2018 Camp Fire that killed 85 people and destroyed the town of Paradise. On the ground, the anger was palpable during the outage, with PG&E officials reporting that front-line employees were shot at, punched and cursed out.

For some, trust in PG&E is so low that they don’t believe the utility’s explanations for the blackouts. “We had 200,000 residents that were affected, schools closed, businesses closed, traffic accidents in Santa Rosa all over the place,” said Sonoma County Supervisor Shirlee Zane.

“It’s really been overkill—it feels like to a lot of us there are ulterior motives, like avoiding further liabilities.”

Some Californians whose power was cut complained that the winds that drive wildfires weren’t actually that high near their homes. But PG&E’s blackouts were in part driven by forecasts that didn’t always prove true.

In addition, the utility doesn’t currently have the ability to pinpoint where it cuts off power precisely to fire-prone neighborhoods.

Other areas that lost power were hit by high winds and wildfires, such as the Bay Area town of Moraga. Homes were evacuated as firefighters battled a 40-acre blaze, which was contained, and there were no reported deaths or serious injuries.

In Los Angeles, the Saddleridge Fire that started Thursday scorched 8,000 acres and officials issued evacuation orders for about 23,000 homes in an area with roughly 100,000 residents. Southern California Edison shut off power to 24,113 customers. By Sunday the utility had restored power to all but 54 customers, a spokeswoman said.

During the blackouts, Californians waited in long lines for essentials like gasoline, batteries and ice, and huddled at emergency centers to charge their electronics. The predicament was met with a mixture of outrage and disbelief.

“I’m embarrassed to be a Californian,” Brad Anderson, 69, complained to no one in particular as he waited in line to buy ice at Coastside Market in Moss Beach, Calif., one of the few grocery stores that was open on Thursday afternoon along the coast south of San Francisco.

In Morgan Hill, a small city south of San Jose, police said they were enforcing a nighttime curfew to prevent criminals from taking advantage of the power outage. Barry Rodenberg, a Morgan Hill resident, said he was shocked that PG&E’s had plunged the heart of California innovation into darkness.

“We are in Silicon Valley, we are inventing things all the time,” said Mr. Rodenberg, who is retiring this coming week from the retail automotive business.

“There are probably a thousand patents a day being made. And they can’t figure out a better grid system? I’m just saying it’s ridiculous, people are really irate over this.”

In Santa Rosa Thursday morning, Charles Phillips sat bleary-eyed in a 49ers baseball cap charging both his cellphone and a backup battery pack along a row of charging portals underneath a tent at a PG&E relief center. Boxes of bottled water were piled up in a corner. Outside, portable bathrooms had been placed in the parking lot.

“Walking around the dark kind of sucks, cooking outside all the time kind of sucks,” said Mr. Phillips, whose home barely survived the Wine Country fires two years ago.

To the west of Santa Rosa, out on the coast, power was still off in the seaside hamlet of Stinson Beach late Friday morning, marking a third straight day of electrical outage.

Steve Kruszynski, 61, said he faced the unpleasant task of using a bucket to haul sewage from his home tank to a nearby larger septic tank because his pump wasn’t working. But he took the blackout in stride.

“I sort of like the quiet,” said Mr. Kruszynski, a marriage and family therapist who shares the home with his 11-year-old daughter, who had missed school for most of the week.

Others tried to make the blackout an adventure. Pete Vahle and his wife, Kilty Belt-Vahle from San Francisco had arranged with three other couples to stay at a rented vacation home in Stinson Beach. When they discovered it would be without power, they called it “glamping” and stocked up on camping supplies.

“The last purchase was bourbon, candles and water,” Ms. Belt-Vahle, a teacher’s aide, said with a laugh.

But not everyone had such a lighthearted attitude. For Jessica Ramirez, a 33-year-old cosmetologist in Lakeport, Calif., the power outage was the last straw.

“We’re going to Washington,” said Ms. Ramirez. “You know, we had nothing but fires. And now we have no power. So I was like, I’m out.”

Ms. Ramirez and her wife, a nurse, both lost out on work. It cost them “a lot,” she said. “At least a few hundred dollars in the couple of days. With two kids at home, that’s a big deal.”

More in the Wall Street Journal

The LAST STRAW for me was two years ago when the traffic at 10am in San Anselmo /. Marin County was a parking lot. I pulled into a 7-11 for a coffee and two thugs went after a guy because he wouldn’t give them any ” “Change “. We put the house up for sale two months later and we are GONE, baby. Pretty Boy Newsom / Jerry Brown and their Marxism have literally turned Paradise into Argentina and Venezuela. The hallmark of Socialist banana countries are power outages.. How can you take a state that is similar to Hawaii… Read more »

Kilty Belt-Vahle is not a “teacher’s aide”, she’s on the board of directors for Educate Our State – some far left ngo non-profit & she’s a millionaire several times over.

She prob LIED to the reporter about what she does for a living.

IMO, I’m pretty sure the elite Dems that run Ca like their own Fiefdom would not be sad if all the rural residents were pushed into metro areas or out of state completely.

I’m not a big conspiracy guy but this fit’s nicely with Agenda 21.