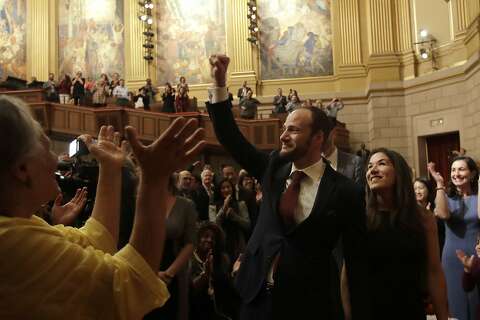 In terms of major policy shifts, the city of San Francisco has served as a political torchbearer of sorts for California — and at times, the nation. Now, with the city’s new, Bernie Sanders-endorsed district attorney, Americans across the nation should be concerned about how a radical shift in prosecuting for the Golden City could have immediate national implications.

Within 48 hours of being sworn in on Jan. 8, San Francisco District Attorney Chesa Boudin fired seven veteran attorneys, including several who were responsible for managing critical criminal units such as homicide, gang, and general felony.

As a former San Francisco assistant district attorney, I know this isn’t just a typical case of administrative shake-up. Rather, it is a dangerous and disruptive move that does a grave disservice to victims and the community.

The institutional knowledge possessed by someone like Ana Gonzalez, who headed the city’s gang unit, is irreplaceable. Criminal organizations and their operations are often very complex, especially in a metropolitan area such as San Francisco. Without prosecutors who have a deep understanding of the various syndicates and the players within them, lawful prosecution of crimes becomes tremendously more difficult, allowing real criminals to walk free.

Assistant District Attorney Mike Swart, who was also among those fired, was recently honored by the Commission on the Status of Women of the City & County of San Francisco for successfully bringing to justice the killer of Pearla Ann Louis, who was violently murdered and stuffed into a suitcase.
Some have pointed to Boudin’s lack of experience as an excuse for his reckless actions — he has never actually prosecuted a case. The truth, though, is far more sinister.

On top of quickly dismantling the violent crime division of his office, Boudin seeks to end the prosecution of what he deems “quality of life crimes,” including public camping, offering or soliciting sex, public urination, and blocking a sidewalk. Instead of handcuffing criminals, Boudin is handcuffing the prosecutorial process and Lady Justice herself.

These firings weren’t based on any incompetency within the department; they were just a transparent effort to cripple the department’s prosecutorial ability. Boudin is advancing a radical ideology that’s focused on completely redesigning the city’s — and the nation’s — criminal justice system.

This dangerous reality is also being peddled by a new brand of Bernie Sanders-endorsed Democrats across the country. And, worse yet, the ideology is seemingly inspired by American communist revolutionaries who gained notoriety during the late 1960s and early 1970s.

For Boudin, the ties that bind him to the violent leftist movement of the last century couldn’t be closer.

His adoptive parents are none other than Bill Ayers and Bernardine Dohrn, the notorious leaders of the communist-driven domestic terrorist group Weather Underground. Ayers was involved in the bombings of a New York police station, the U.S. Capitol, and the Pentagon in the early ’70s.

As a young adult pursuing a career in law, Boudin didn’t abandon the radical ideology of his upbringing; he embraced it by moving to Venezuela. Boudin served as a translator for Hugo Chavez, the communist dictator who dismantled the nation’s democracy and set the country on the path to its current state of socialism-induced economic collapse.

Now, as a Yale-educated attorney, Boldin has inexplicably found himself believing that he himself is the victim of a broken criminal justice system. As a result, he’s committed to radically transforming that system.

Of course, if this was just this one city’s district attorney with a wild, made-for-Netflix story, it probably wouldn’t be worth noting. But it’s much more than. This is exactly the kind of candidate Bernie Sanders — who has his own checkered past supporting communist dictators abroad — has been championing all over the country.

In 2018, one of Bernie’s most high-profile endorsements was of Andrew Gillum, the Democrat candidate for Governor of Florida. Bernie’s support propelled Gillum to a major upset in the Democratic primary. Gillum, who campaigned frequently alongside Sanders, signed the “Freedom Pledge” by a radical group whose extended statement on racial injustice calls for defunding prisons and police and proclaims “police were never meant to protect and serve me and you.” (Gillum has denied embracing its full agenda.)

MORE IN THE SAN FRANCISCO CHRONICLE

They’re going to do nothing but go after gun owners.

He needs to be eliminated from the position

this fool needs to get eliminated from the position and removed

Sanders relates to this guy naturally – note the Communist salute in the photo. Suckled on the mothers milk of the Weathermen, Boldin is clearly a fellow traveler.

And then the idiots will continue to flood into Marin and, make this place unlivable. It’s getting that way already from the San Fran types coming into Marin..