Brazen SF thieves now breaking into cars with people in them 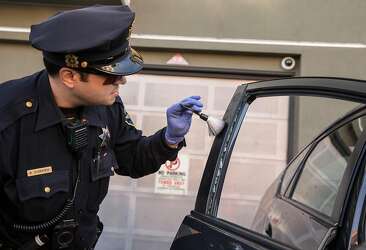 But look closer, and an alarming trend is emerging: Smash-and-grab assailants are no longer focusing just on the familiar tourist sites rife with unsuspecting vacationers in rental cars.

While the citywide numbers dropped a bit, numbers shot up in some police districts that are mostly residential and rarely show up in guidebooks. The biggest jumps came in the Richmond and Taraval police districts, which each saw a 24% spike from 2018 to 2019, and the Ingleside police district, which saw a 20% increase.

Perhaps no place in San Francisco saw a bigger jump in shattered glass than the parking lot of the Safeway in Diamond Heights — and local residents packed a recent meeting to ask new District Attorney Chesa Boudin what he’s going to do about it.

The need for a meeting in the first place was confounding. While car break-in hot spots have previously included postcard-worthy landmarks such as the Palace of Fine Arts and Lombard Street, no out-of-towner in his right mind would make a point of going to the Diamond Heights Safeway. I can say this with authority because I shop for groceries there every week, and there’s nothing noteworthy about it.

It’s one of the rare San Francisco Safeways that’s so nondescript it doesn’t even have a nickname. There’s Dateway in the Marina, famous for pickups in the produce aisle. There’s Gay Safeway in the Castro. And there’s Soviet Safeway on Monterey Boulevard, known for its sometimes bare shelves and buckets placed in the aisles when it rains. (Don’t blame me for these names. I’m just the middlewoman.)

The Diamond Heights Safeway and its shopping center featuring a post office, Walgreens, dry cleaner and bakery is frequented by local families and retirees, and it’s surprising the organized rings of car break-in thieves even know it exists. The one nickname I could find online was a Reddit user who called it Secret Safeway.

But for thieves, the secret is out.

In a 1,000-foot zone around Not-So-Secret Safeway, there were just 19 car break-ins in 2018. That jumped to 77 break-ins in 2019, a rise of an eye-popping 305%. Police statistics show thieves are targeting the lot on weekdays between 4 and 8 p.m., when people are getting off work and running inside to grab groceries.

And like so many stories of Bay Area property crime recently, the acts are getting increasingly brazen.

Rodney Suzuki, a financial planner, said he picked up a few groceries at the Safeway after work with his daughter in November. He got back in his gray Nissan sport utility vehicle and started reversing out of his parking space when the driver of the car next to his zoomed backward in a semicircle to block him in.

Somebody leaped out of the other car, smashed his rear window and grabbed his daughter’s backpack, and the car sped off.

Yes, San Francisco thieves are now breaking into cars with people inside them.

“It took a few seconds, really — I couldn’t believe how efficient they were,” Suzuki said. “We were shocked.”

He reported the crime to police, who said they’d never heard of a car break-in of an occupied vehicle.

“But now they have,” Suzuki said.

In an outcome that will surprise nobody, no arrest has been made.

Suzuki shared his story with me outside a meeting room at the Police Academy near the Diamond Heights Safeway the other night. Supervisor Rafael Mandelman called the meeting after his office received the alarming police statistics, and angry residents filled every seat, sat on the floor and spilled out into a hallway and outside.

They were there seeking answers but also, it seemed, to get a close-up look at new District Attorney Chesa Boudin. All eyes turned to him when he walked in with security protection a few minutes late. To his credit, he took many questions from an audience that probably didn’t vote for him in big numbers and stood behind a podium decorated with the SFPD symbol despite his repeated clashes with the police union.

“This neighborhood is bucking the trend across the city,” he acknowledged to the frustrated crowd. “We’ve got to do better.”

Echoing his campaign pledge, he said his biggest priority is beefing up his victim services unit so those whose cars have been broken into can get help from the district attorney’s office. Currently, many people who file police reports never hear a peep from a city official.

“Most victims of auto burglaries will never see the person who broke their window arrested, much less prosecuted, much less convicted, much less will they ever see restitution paid to them to fix their broken window or replace their stolen goods,” Boudin told them.

Boudin said his office prosecutes 84% of car break-in cases that come its way. The problem is that so few do. Police are able to make arrests in less than 2% of reported car break-ins each year.

Boudin said he’s working with supervisors to introduce legislation creating a fund so the city can contract with auto-glass repair shops to pay for broken windows at a fixed, cheaper rate than what regular residents would normally pay. Boudin is also pushing for legislation at the state level to give counties more funds for victim services.

The district attorney said his crime strategies unit is also working on ways to deter auto break-ins. He said $1 billion in stolen goods is fenced in the Bay Area every year by “organized, sophisticated, brazen” thieves. He wants to focus on breaking those rings by placing GPS devices on electronics left in bait cars and tracking where they go after they’re stolen.

Boudin said he wants to continue the city’s education campaign to remind people to leave nothing in their car and to always file a police report.

He recounted a jaw-dropping story about meeting recently with constituents at a cafe in the Western Addition. He said he saw a man swipe a laptop from a woman as she was typing on it and gave chase. The assailant leaped into a getaway car, and Boudin said he should have used his phone to take pictures of the car and the license plate. But instead, he kicked in the window before the car sped off.

“When the police arrived, they said, ‘Don’t do that,’” he said with a grin.

A woman after the meeting scolded Boudin, saying San Francisco has become a free-for-all where criminals face no consequences — and she fears it will get worse under his progressive policies.

“People are really upset!” she told him. “Your feet are going to be held to the fire!”

But the vast majority of car break-in thieves will never see any kind of punishment in San Francisco.

Police said they think the Safeway parking lot has become such a hot spot because people don’t think twice when they see others walking between cars in a packed lot, so thieves can blend in. Also, those using the lot are vulnerable because they’re obviously going to be inside for at least a few minutes. It’s also near fast-moving Diamond Heights Boulevard and Interstate 280.

Plus, police have responded heavily to tourist hot spots that had become seas of shattered glass, so thieves have had to go somewhere else.

“They’re smart,” said Cmdr. Peter Walsh. “If we move everybody over to the Palace (of Fine Arts) or the Beach Chalet, they’re going to find other areas. It’s an opportunity thing.”

Police said they’ll be working with the shopping center’s owner to install security cameras and educate parking lot users about leaving nothing in their cars.

Maybe.. just maybe.. If a Few of these thugs get popped on the spot while they try to break into an occupied car .. it may send a message.. Bring back the Vigilance committees of 1853-54 and 56 That Mr Coleman of San Rafael ran at that time. ..

S.F. is a great place above the third floor of any building. The scenery is unmatched. You can order food in and Uber can drop off or pick up from your high rise accommodations. If you are on the street it’s all about avoiding zombies.

That cop has to be a store prop. The po-po in San Francisco are too busy looking for lost donuts than wasting their time on crimes against citizens who will keep voting for more of the same. People love being victims in San Francisco! It’s what makes it special.

With no way for a citizen to protect themselves and no repercussions from the DA, what’s to stop them?