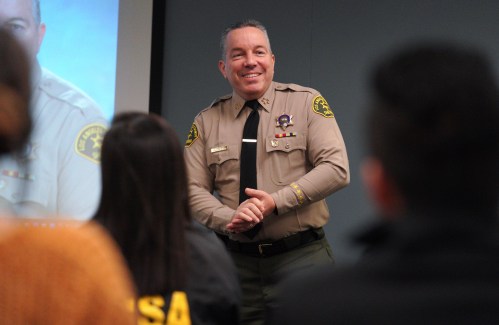 LOS ANGELES – The Los Angeles County Sheriff told FOX 11 that his decision to release over 4,000 nonviolent inmates from county jail has been effective in preventing the spread of COVID-19, however, he has concerns about a potential future surge of crime as a result of so many inmates being released.

In an interview with FOX 11 on Monday, Sheriff Alex Villanueva said that he released 25 percent of the county inmate population, which equates to 4,276 nonviolent inmates. “We were faced with a choice, if we left the jail system fully populated and overpopulated then the pandemic is a lot easier to sweep through the jail system and jeopardize everyone’s safety,” Villanueva said.

Villanueva told FOX 11 that LASD was the first Sheriff’s department in the country to begin the early release of inmates, which they began on February 28th. LASD focused on releasing nonviolent criminals in pre-trial detention, or those who were about to finish their sentences within 30 to 60 days. 75 percent of the jail population, including the most violent, are still locked up behind bars. “We have approximately 1,200 murder suspects currently in jail, that’s greater than the entire population of some jail systems,” Villanueva said.

Despite stats showing that violent crime has been down across the board recently, the Sheriff said he fears it may not stay that way for long. “We just have to be hyper-vigilant because that pendulum can eventually swing in the opposite direction,” he said.

Specifically, Villanueva worries about a potential surge in crime following the pandemic, with thousands of inmates now on LA’s streets. “What’s going to happen is some of them are not going to go back to court, they’re gonna go to warrants to speak, for failure to appear,” Villaneuva said. “People who are not in jail are losing their jobs, much less those that didn’t have a job, to begin with, and are out on the streets, we’re now adding to the mix, it’s uncharted territory that we’re headed into.”

This is the same sheriff who closed the L.A. gun stores because he deemed them to be nonessential.

As a condition of employment, Sheriff Villanueva should be required to daily turn in his government weapons before going home. Moreover, he should surrender any “nonessential” firearms he has at home.

Mr. Sheriff, just to be clear — using your own definition — ALL of your firearms are nonessential.

Odd see no down sizing of County or City payrolls.

Actually why do we need the Sheriff’s Dept at all when they don’t care about protecting the public but just want to protect their own jobs programs and fiefdoms?

Funny isn’t it. They are still pulling paychecks and the number of prisoners is way down. Why do we need the jailers or the support staff then ?? Hmmm

What could this law enforcement officer possibly be smiling about?

If your upset at releasing early they are releasing felony offenders at the time of arrest. So people are not going in and are getting out early.

Combined with Prop 47, that all the idiots voted for, it should be a field day for all the criminals in our neighborhoods
Thank you, can I have another…

showandtell
Reply to  B B

This was something the L.A. County geniuses wanted to do anyway, led by the ACLU.
Not you and those who comment here, I know, but does ANYONE ELSE still think this is all about quarantining CoVid?

showandtell
Reply to  B B

Sheriff is saying the released are “low-level criminals” but don’t forget they have redefined what low-level crimes are in the meantime. Sheriff asserts that the only prisoners left in the facility are murderers. No mention of rapists, arsonists, assault with deadly weapon, etc.

I thought the covid-19 order was to “stay at home”… and we’re releasing these prisoners to the streets? Just what the eff is going on here. I swear, the democrat way is to create chaos so they think we think we need big government. How about just enforcing our current laws on the books and now allowing judges to overturn laws.

I’ll bet the girlfriends/spouses/kids/neighbors don’t want them back home either.

That downright criminal, endangering public safety. This is nothing more then a jail break, with sheriff responsible for the jail break.

Apparently protecting the public (and victims of these crimes) has completely dropped out of the politicians/officials’ conversation and thus the coverage of this. All we’re hearing now is a stream of talking points about protecting the prisoners and the guards.

“Hi, my name is Sheriff Dubmfug and I’m opening up the jails that my staff wasted time AND your money incarcerating criminals. The next time you are mugged, robbed, beaten, raped, even killed; remember I was the one who kept the virus under lock and key…”

Well they should reduce the pay accordingly

AND he’s trying to close the guns stores.. This is heinous.. Unbelievable.. A Spike.. This will be a a crime wave of thugs who have no where to go, no money and no place to stay. They were and we were safer with them locked up.,.Now, they have to rearrest them as they committe more crimes. How many people will die as a direct result of this asinine move. Please do NOT re-elect this fool. He’s taking orders from Da Mayor, who is dumb as a rock and uses politics before the people in every move.

We didn’t elect him in the first place. The incumbent sheriff was way ahead on election night in 2018 but after the election Villanueva “miraculously” came from behind to win. (Hint: Ballot harvesting)

You might well yet be able to use that new firearm to defend yourself against the mass jailbreak this fool just caused.

WELL DOH!!!! Welcome to LA where crime is all in good fun.

Anyone up for starting again the San Francisco 1853-56 Committee of Vigilance.. ??