MEMO: Gavin To Shutter All Beaches 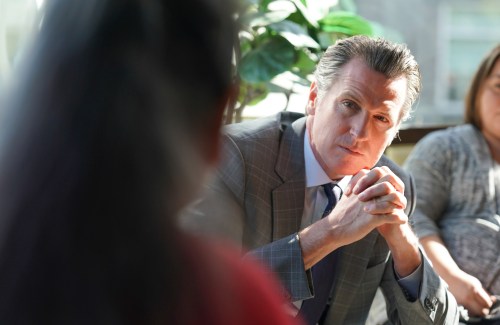 LOS ANGELES – Governor Gavin Newsom was expected to announce the closure of all California beaches and state parks during his daily coronavirus state briefing Thursday in the continued fight against COVID-19.

On Monday, Newsom scolded beachgoers after seeing images of crowded beaches in Orange and Ventura counties that surfaced over the weekend, which displayed a lack of social distancing. “The only thing that will slow down our capacity to begin reopening our economy is our inconsistent behavior,” he said.

Tens of thousands of people flocked to Orange County beaches over the hot weekend as beaches were closed in neighboring San Diego and Los Angeles counties.

On Wednesday evening, the governor sent a memo to the state’s police chiefs that said: “all beaches and all state parks in California will be closed, effective Friday, May 1st.”

“I support safety. And I believe that he will make it safer,” one beachgoer told FOX 11.

However, the expected announcement has garnered some opposition.

“Closing down the beaches is a real extreme measure. I think you have to let the people use their own good judgment. I think most of the people I saw in Huntington Beach on Saturday and Sunday were practicing social distancing,” another beachgoer said.

“This is not going to end well,” Republican Assemblywoman Melissa Melendez tweeted.

What ever happened to recall Gavin?

Midway the most active effort (RANAF-Erin Cruz) was blocked by some of the counties; i.e., they REFUSED to hand over petitions with valid signatures to the Secty of State. Rumors of this chilled signature-gathering and in the end they didn’t have enough signatures.
The other effort by the San Diego physician Veltmeyer never really got off the ground and he gave it up in January.

We need to remind this little “dicktator” what the people of Italy did to their fascist dictator Mussolini!

Yup, the sooner the better

ode to the exalted classes:
.a useless a**hole name of newsom
.went to the wrong place for to screw-some
.some f*** tried to drill him,
.then wanted to bill him,
.while dreaming of andrew d. gill-um

I want to see Gavin on a horse galloping around the beach telling everybody in his very raspy voice that they need to leave… let’s see how that goes.

Author
tippermart
Reply to  no name

Milk snort. He’d probably do it.

FOAD
Reply to  no name

Boy is he power hungry and wants to show his authority.
I feel sorry for you California.
You should really get together and elect a few decent people.
Of course Oregon is in the exact same boat.
And the law that says you can’t sit in a chair on the beach you have to sit in the sand
is absolutely STUPID by anybodies standard !
Who in the heck came up with that???.

By the way, word on the street is that people can’t get through to the State Unemployment Office to apply for benefits. They go to the website, it crashes, they try to call, a recording plays and directs them to the website. This is truly Kafkaesque. I recommend “The Castle,” Franz Kafka, if you want to submerge yourself. Sort of like people watching “Contagion” (go figure) in record numbers on Netflix. 🙂

Like Andrew Jackson Once said about a Supreme Court decision.. You have your decision.. Now try to enforce it.

Just pick up the barriers and move them to the side, then walk on to the beach! What’s a donut eating cop gonna do? He won’t use his gun, just his radio, and by then it’ll be 10,000 on the beach. Arrest them all? Doubt that. Grow a pair, CA, get these mamby-pamby nannies out of your way! Remember, they HAVE to social distance, so there will be no contact. Give them all the finger and get on with BEACH PARTY!!!

Actually their letting many felony criminals out of prison so they have room for the beach goers. (sarcasm but somewhat true)

Dear, Attorney General of the United States of America,

Help us. The state of California is denying us the right to processable assemble to present our grievances to for redress. With that clause of the first amendment curtailed, Californians are left with “pitch forks and torches” a much less desirable outcome for the California’s nomeculturalist.

US Legal Citizen, stuck in California

Is it not time to march on the capitol with pitchforks, axes, machetes, and what ever else weapon you can put your hanss on and take back the state from this fascist dictator?

Do it on Friday, May 1 at Noon:
Find a Protest Near You:
https://wehaverights.com/

Chicommafornia where it’s illegal to go outside and the government takes away your livelihood through legislation. Ahhh, Democrats.
I saw Obama on the golf course yesterday. Just after his wife had finished a PSA for the DC area telling the sheeple to stay indoors.

“Rules for thee and not for me”.

Aunt Nancy told him to do it.

Looks like this latest slap-in-the-face from Newsomlini was the last straw for most Californians.

Motherf*cker. The things that people need the most – fresh air and sunshine are now illegal.

Get used to it. Newsomlini is going full on fascist now and drunk with power. He cannot keep 40 million people in lock down and the cops can’t do it either.. Its time folks to cast off the chains of being on the demoRat Plantation and free ourselves from tyranny. Kalyfornia is in ruins and is a dumpster fire and was heading this way for a long, long time. Seriously re-consider who you vote for if it has a ‘D ” by it’s name and vote to break the strangle hold the demoRat party has on this state with their… Read more »

You, John Steele, are absolutely right. It’s been a looooong time coming.
Let’s pray it takes hold this time.

The aggressive overreach for power drives these egomaniacal politicians. There will come a day of reckoning.

PRK subject who wants to remain anon
Reply to  Hardstool

Sadly you overestimate the intelligence and memory of the average California voter.

If you live near a beach community why import the horror of Corona virus coming from hordes of visitors. There is no easy way out of this mess……

The death numbers are unreliable because, as you say, they’ve been “doctored.” There was a financial incentive for hospital administrations to pressure staff to label every death a COVID death. As most of you already know..

Glad people are waking up to this fact, the word needs to spread. More people need to realize this and stop believing everything the MSM and government tells them. You really think they have your best interest in mind?

Well stated! I’ve been telling friends this for weeks and having some heavy arguments about it too – needless to say, the social circles will become a lot smaller once the dust settles. Oh well.

It’s good to speak up but don’t bother arguing about it, they can’t hear what you are saying. I’ve tried it too. If they don’t have religion, CV-19 becomes their religion and you are threatening their purpose in life. Masks and social distancing are a pale imitation of the real thing, aren’t they?

You want a private beach, buy it. Other beaches are public and that means for public use.

How about protecting us from the made in China cornonvirus from the hordes of medically unscreened, illegal aliens across the southern border.

Or the public health hazard presented by tens of thousands of addicted and mentally ill homeless/vagrants on CA’s streets, who have transmitted medieval diseases and typhoid, hepatitis, TB, etc., to each other and to passersby over the course of several years? Not one effective policy out of any of these con artist politicians, just show policies and theater to stuff the slush funds for themselves and their friends (non-profits, wealthy developers). Sigh..

Gov. Newsom does not have enough National Guard combined with law enforcement Police, Sheriffs, and Highway Patrol to close all the beaches in California. Sooooo, back to the drawing board for Gov. Newsom.