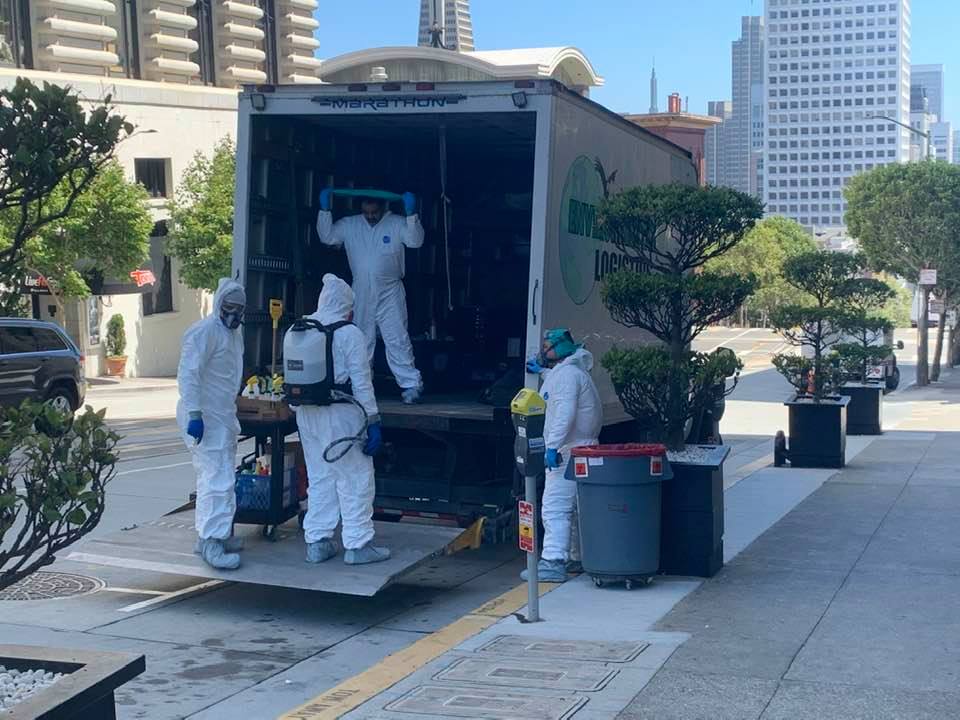 San Francisco, Calif. – One of the premier West Coast hotels required a hazardous materials cleanup crew, the result of the city’s policy of housing the homeless on the taxpayer’s dime during the Covid crisis.

The Intercontinental Mark Hopkins, a luxury hotel atop swanky Nob Hill, dispatched unruly guests to another undisclosed property. Afterwards, a hazmat team showed up to tidy up the premises, according to ace KRON reporter Erica Sandberg.

“The guests wouldn’t abide by the rules. The city paid Ubers and cabs moved them to a different luxury hotel,” she said.

Checkout day at the @ICMarkHopkins. the "guests" wouldn't abide by the rules. city paid ubers & cabs moved them to a different luxury hotel – w/ fewer rules & slightly lower price. I'll reveal which when I have the go-ahead. I wonder what hazardous materials they're removing… pic.twitter.com/97QsJwBtqU

Since city and state civil servants months ago unveiled Project Roomkey, to spend millions to house homeless in private hotels, San Franciscans have been horrified by a series of revelations in recent weeks, first reported on Press California.

First, a jail bus was spotted dropping off guests at the Mark Hopkins, presumably inmates released early due to Covid. Second, city workers such as museum staff, rather than being furloughed, were drafted to serve as gophers to deliver marijuana and alcohol to homeless guests, paid with government funds.

“The incentives are perverse. Free room and board encourages people to stay and move here even though they will never be able to afford living in such a city,” said one Twitter observer.

As for the latest development at the Hopkins, city lovers theorized on Twitter about the cause: A meth lab? Bodily fluids? Used drugs? Ghostbusters?

Regardless of the materials, “It’s going to be a hell of a bill,” Sandberg said.

Such scandals have been the new normal on Nob Hill, home of several of the city’s most prestigious hotels, the elite the Pacific Union Club and luxury apartments with a veritable who’s who of old San Francisco.

“The Spitter,” for example, lives up to his name on a regular basis, aiming mouth drivel at innocent passersby and the police without restraint or repercussion.

And last week, a naked man was seen bathing in the nearby Huntington Park fountain. “I will not be missing that on my morning walk,” one Nob Hillian said.

Lets have the names of these city and state civil servants who unveiled Project Roomkey. These snowflake ‘virtue signaling’ officials need doxing, reduction in GS pay scale, and/or outright firing,

Ha ha ha. Back in 98 many a self loathing liberal laughed when said paying the homeless to be homeless will be the ruin of this city. Enjoy Shart Fran Sicko!

And all the money they are spending means no unemployment benefits

Unemployment benefits?!? What benefits? There is no middle class; there are no jobs from which to benefit.

Dems could eff up the working parts of a brick!

Where are the usual liberal trolls defending the democrats?

When you lie with dogs you get up with fleas.

Don’t forget the bed bugs … and the state / county / city regulations forbidding use of chemicals to eradicate them.

It would have given Herb Caen the absolute vapors to hear his beloved city referred to as “The Sh*tty by the Bay”. However… it is what it is.

Didn’t most of the hazardous material go away in Uber cares and taxis? I wonder if Pelosi considers hijacking luxury hotels for bums taxpayer money well spent.

Motel 6 and Super 8 unavailable? Why push convicts/homeless/addicts into luxury hotels?
This is the problem with the nuts running S.F.. Everything and anything for everybody. Life doesn’t work that way.

What is mostly left in San Francisco, are either the luxury hotels, or those that rent rooms by the hour, clean sheets and towels not included. Putting the crooks, bums, and loons, in the luxury hotels, is class warfare, as practiced by disciples of Marxism

In advertising we learned that an ad campaign paid for by Chiquita Banana helps the sale of ALL bananas. Similarly, it seems that an unholy mess paid for by Project Roomkey (really CA and US taxpayers) taints and stigmatizes ALL big city CA luxury hotels.

These great facilities will NEVER be the same. And the stigma will cost them a fortune SF needs another quake..a BIG one.

You can hire a thousand HazMat crews have them clean the rooms for a thousand days straight and it won’t remove the taint and stigma that the incredibly stupid people responsible for “Project Roomkey” have visited upon these luxury San Francisco hotels, apparently with the hotels’ cooperation.

was that project “romney” ?

Cooperation is a funny thing. When the local government has the power to shut you down, you tend to cooperate. And several months “lockdown” didn’t help their finances any.

You wanted it San Francisco, you got it!

The problem is everyone thinks that these are just normal people, who lost their homes for no reason of their own. No, they are almost ALL drug addicts and criminals. You put them anywhere and they will destroy it. They belong in jail and mental institutions. Have fun liberals in your dying cities.

That doesn’t fit the narrative or further the interests of the DNC; we have to believe that ‘homeless’ means ‘innocence’, ‘black’ means ‘victims’, and ‘disagreement’ with democrats means ‘racist’. Otherwise, you are going to be cancelled faster than a terrorist gets released from jail.

You forgot insane. Most are what is known as “dual diagnosis,” which is a drug using crazy person.