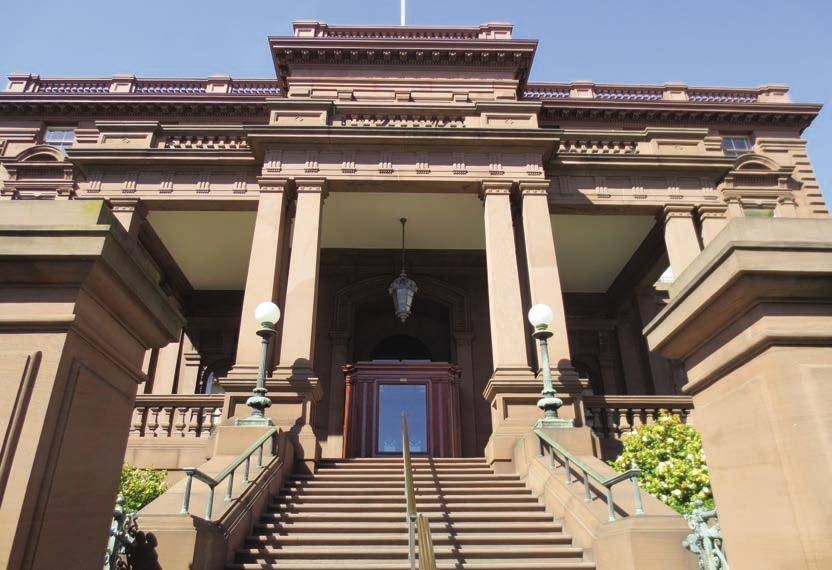 Defund the police? No prob. Pelosi brings her own

San Francisco, Calif. — City leaders and activists are working hard to lock down San Francisco businesses and defund the police, but one Democrat didn’t get the memo for either.

Speaker Pelosi, in a follow up to the HairGate disaster, lunched Wednesday at the Pacific Union Club, an exclusive band of historically incorrect Old San Franciscans.

While many restaurants around the city close for good, her maskless meal reminds one that those in the know can still get a sit-down bite to eat in the city with little ado.

Nor have calls to eliminate the SFPD inconvenienced Ms. Pelosi. A Department of Homeland Security officer with a bomb sniffing dog walked the whole block before she went inside.

“Defund the police, it does not seem to be working quite yet,” dryly remarked one Nob Hillian, who was privy to these events.

The Pacific Union, the city’s most elite social club, stands atop Nob Hill, a name that pays homage to four original neighbors, the nabobs or “nobs,” who started the Central Pacific Railroad.

The four uber wealthy white men were Leland Stanford, Collis Potter Huntington, Charles Crocker, and Mark Hopkins, whose namesake hotel stands across the street, a luxury landmark now populated with homeless drug and alcohol addicts, compliments of the city of San Francisco, which is picking up the tab for the rooms and the substances via Operation Roomkey.

The quartet, along with many alumni of the club, have been targets of contemporary cancel culture for a list of misdeeds too long to mention. One wonders, rather than supping at the club that celebrates the Big Four, whether a lioness of liberalism like Pelosi should boycott it.

For more independent California news, check us out at PressCalifornia.com

“Nancy nibbles with Nob……”
Sure, I’ll take your bait. I’ll go there for your comment section. Ready?

Before the Coronavirus pandemic The Mark Hopkins Hotel was usually filled with filthy-rich housed drug addicts and alcoholics, many also with serious mental illnesses.

Leave her alone to along with the others sink America:The only hope we have is the entire paradigm sinks so hard we get a bounce that establishes a platform from which we may be able to rebuild from, maybe.

Obvious psychopath old nance…. the level of narcissistic entitlement is off the charts. Reminds me off her bud old obumbo.

Put up or shut up

I don’t want a history lesson, if you got dirt on Nancy eating in a restaurant then post pics OR IT DIDN’T HAPPEN!

There is pics of her getting her hair done. That not enough for you?

Lioness like Pelosi? she is a self-centered alcoholic who should stay home and play with her Great Grandkids

Vile. Just vile. There’s really no word in all of the world’s languages to describe the depths of this woman’s depravity. May God have mercy on her soul.

No mercy, may she go straight to hell!

She would have no mercy for you, why ask God to grant her anything?

Because, I’m better than her!

One could reasonably conclude that Marxism is the leading cause of psychopathy. And that their school system has now created at least two generations that will eat their mentors.

Maybe this was why she got her hair done.

She was on TV an hour and a half after getting her hair done… you guessed it… lecturing people about wearing their masks.

“It is curious how people take it for granted that they have a right to preach at you and pray over you as soon as your income falls below a certain level.”
― George Orwell, Down and Out in Paris and London

But her hair was perfect!

Typical Democrat/Socialist behavior. They don’t really give a crap about people, they just want votes to grab power!

Trump on the other hand?

His true opponent is himself … he’s constantly shooting himself in the foot … Joe Biden..?

My dog could beat ‘Covid Joe’ and I buried him in the rear garden years ago.

At least I learned about San Francisco’s historic past. Thank you.

The pinnacle of Pelosi’s reason for living is exactly this sort of hobnobbing and mask-less indoor dining with the “cancelled set,” right? Sure, it is the very height of hypocrisy that she herself (the big phony) wouldn’t hesitate to screech about from a soapbox with gnarled finger pointing at someone else, but it’s really the very thing that defines her. I challenge her or anyone who supports her to deny it.

Just proves to all of us that rules are for the little people, right Nancy? Thought so.

Also proves to us that we don’t need masks or social distancing for 99.9% of us and we can now FULLY OPEN UP FOR BUSINESS. We can thank Miss Speaker of the House for demonstrating that none of that is necessary. Right, Nancy?

Pelosi would look good being loaded into a Guillotine.

She’d look even better being loaded OUT of a blank.

What do you expect her to do? Sitdown dining at McDonald’s isn’t available.

She could do what her homeless crew do: Head to St. Anthony’s dining hall (closed of course) in the TL between the hours of 11: 30 and 1 (though seniors like Nancy can fed as early as 10:30 believe), same one she funds (feds and city monies), line up with the homeless, pick up two bags of food (it’s actually pretty good), a bottle of water, sure to maintain your six feet at all times.

She was there to cut the ribbon on the place …

while in another part of the state….comala was gobbling ….

Having her body hair blown and dried like the boss …

Actually, the author really meant “Nancy nibbles with the MOBS”, perhaps some of the “NOBS” are in part of the “MOBS” though.

Pelosi is an ignorant, hysterical, hypocritical control freak having never had a real job in her entire useless life. The perfect representative leader of the now totally anti-America, anti-freedom democrat party.

And her father was mayor of Baltimore, so inter-generational leeching off the public.

Pelosi wants to #DefundThePolice for the rest of us poors. But for her and the elites they get full security.

What a delicious dish on the Nancy.

Yum! You said it. Grateful someone served it up for us. 🙂