WATCH: Secret Antifa tent city found, and Portland is paying for it 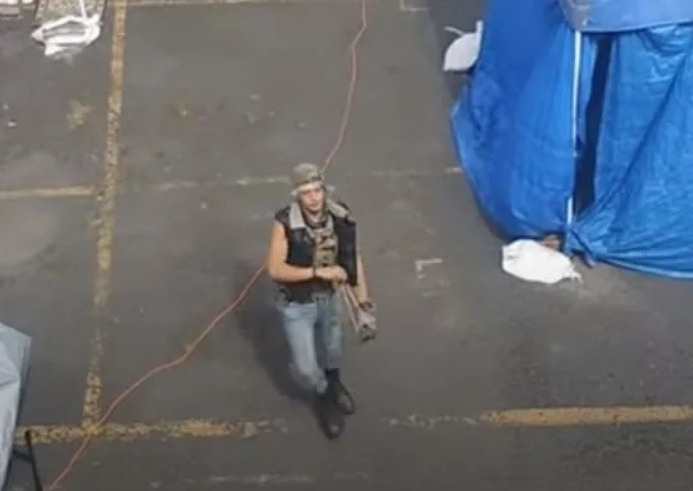 Where do Portland Antifans rest during the day between riots at night? In a hidden tent city near downtown, paid for and serviced by the city, according to a local citizen journalist.

And they didn’t like their cover blown. After capturing the encampment on video, “I was chased approximately four or five blocks by two men, one with a slingshot,” reported the Vlogger, who remained unidentified for his safety.

“This encampment is filled with young vibrant people who are actively, at night, committing crimes, and burning Portland to the ground,” he said on his YouTube channel, Never Alone With Christ.

Anonymous or not, public records provide a troubling bombshell. The encampment is one of several specialized shelters under the auspices of the Joint Office of Homeless Services.

It is entirely funded by the city of Portland, with start-up costs priced at $214,097 and ongoing support for all three sites expected at $155,488 monthly, N.A.W.C. said.

Mayor Ted Wheeler and Portland City Commissioner Jo Ann Hardesty are said to be the key backers of the temporary outdoor shelters such as this one, located at the Star Park Festival Lots by the Hawthorne Bridge Junction.

Two large buses are often nearby, but weren’t on the day of filming, he said.

For more independent West Coast news, check us out at PressCalifornia.com

Kill every Antifa|BLM. See one? Kill one.

I saw this video months ago. Why didn’t Portland do the right thing & put these anti-American communists in jail? Oh, that’s right, the whole city is communists killers….

What kills me is accidentally step in a store without a mask catch hell These so called homeless and druggies can poop in the gutter in front of a restaurant and gets a pass.

Republicans in that area should go tear it down. Duh!!!

Portland is paying for these encampments ?
I don’t think so !
Th tax payers are paying for the rioting criminals to stay here.
Whether you like it or not you are subsidizing these thugs.

If Trump gets re-elected and signs the Insurrection Act, these people could be declared a standing army and dealt with. Right now, all that is missing is their uniforms. They are usually armed and all “Antifa” types. My heart goes out to the homeless. But they are being recruited by commies or made homeless by secret-societes that make them dependant on them ….OR ELSE! Many homelss people get asked how they became that way by secret society cops and undercover secret society memebers, operatives. If they tell the truth, they get beaten, killed, laced drugs they may be addicted to,… Read more »

They are not protesters. They are insurgents. They are enemies of the American people. This is war.

Surround them and destroy them. Every. Single. One.

Do it with fantastic brutality so that their counterparts in the other cities will understand what is coming for them and will live in fear until the moment we arrive at their camp comes.

Go during the day while they are sleeping.
Then burn it.

So, ultimately the tax payers , which they terrorize day and night are housing them!!!

Weapons are not allowed in the city funded homeless camps…

The redcoats would camp outside the city before burning, looting, and declaring it “the queens” afterwards. This is a domestic army on domestic soil against their own domain. Enemy combatants. Legal loopholes are being used against America to take it down from within. Especially religion and race

Go in there at night, while they are burning down Portland, burn up they
re camp

Fire is the solution for many problems. It’s one of nature’s ways of recycling.

Send in the flamethrowers.

Send in the drones….

I don’t know how or why, but the words “Target Rich Environment” suddenly popped into my head…

The city is paying for this

oops, you mean the taxpayers…

I wonder if The city of Portland pays their meth bill. I bet they do.

They are, at least, contributing by taking care of these anarchist’s living expenses.

Demoncraps committing treason and hate again. That’s all they know as a party.

Good investigative video work but he should not have blown his cover by shouting
trash talk at his suspects. If they look at you, simply wave at them like you are a long
lost buddy. Once ‘outed’ don’t be a hero, have an exit plan and blend into the city ASAP.
You already know the suspects like to dish out physical hurt/pain. No need to give them a
chance to attack you. but what do I know? I handed in my P.I. license to the state. Retired!

Set fire to it, once they’re all asleep, about 7 AM
After a night of Meth-fueled rioting, it’ll be a fun wake up call

It’s just a homeless camp, they are all over the USA.

Shawn May
Reply to  Ed

Shawn May
Reply to  Ed

Obviously you are new to homelessness I’m surrounded daily with them I’m also on several Facebook paiges of travelers homeless dont get x amout of space for there tents porta potties you my friend are delusional a homeless would laugh at you I work in downtown dayton Ohio matinence for hud properties, for you I better explain that’s income based rentals we house HOMELESS I know folks that would love a “HOMELESS CAMP” HALF AS NICE .sir go back to your parents basement in the burbs because walking around with your silver spoon around HOMELESS you wont wake up with… Read more »

Ed
Reply to  Shawn May

The government is setting up these camps all over the country.

Sarah
Reply to  Shawn May

Pittsburgh has porta potties (although they call them porta Johns) near or at several of the areas where homeless congregate. It makes sense financially when you have a sizable homeless population because it stops people from publicly urinating/defecting and the consequences of such.

As for space etc that’s a change that many US cities have made because of Covid. They realized oh hey these people all huddled in these tiny spaces pose a public health risk so we should let them be in a space where it’s possible for them to socially distance.

Hmmm. Just a thought, but why don’t protesters go burn down these tent cities and bring the riots to them while they rest in the daytime? Like these junkie pinkos do to Americans at night?

You mean like how people kill vampires when they’re asleep in the daytime?

If I had a Rocket Launcher some SOB would pay. Kidding of course 🙂

Ditto that except I’m NOT kidding!

@The_JJB That’s excellent pinpoint locating. I often wonder where these peace-loving mutants go after they stop their gainful activities and “clock out.” It seems they return to their “lair,” which is apparently provided by Portland. But I’m sure many return to their parents’s basement and chill. I don’t suppose anyone would imagine going there and give these peace-loving mutants some Karma, would they? For instance, they might torch all the tents, once they’re unoccupied, of course. But before they do this, they should recover any loot, er, stuff these mutants will no longer need. Portraits of Saint George Floyd found… Read more »

President Trump should be made aware of this! So he could send in his troops and shut it down and arrest everyone!!!!!

Will the Governor ASK Trump for hélp?!????

Wheeler and Hardesty should be arrested for funding these losers.

Remnants of the Manson family a bunch of sorry losers backed by the Mayor sick!!!

F..@#$ Antifa losers !!!!! no hope your cause will never see the light of day so go ahead get ready to go to jail or other drastic things it’s all on you.

Everyday we find more information on how the rioters in Portland are being supported by those we have always considered upstanding and good citizens. Obviously they are not good citizens at all. What good citizen would support people who destroy our cities, our businesses, and many many lives. Silicon Valley and some of the richest people in our country are supporting this insurrection, or rather this war on our Constitutional Government! It’s shocking, but these rioters, looters, and in some cases killers are not spending their own money. In most cases they are receiving government money and money from some… Read more »

There was a time when citizens would gather an raid such encampments, and drive the bastards out. Sadly, no longer.

Tax payer funded mostly at the end of the day.

Burn it while they sleep in it. KTA

They have to sleep somewhere, the feds should be there when they sleep during the day and blow a bull horn. Sleep deprivation can do a number on you.

Looks a whole lot more comfortable than a jail cell. Are there any spaces available? If yes, what is the monthly rent?

Its FREE, the city is providing. Being a “homeless” camp, there may even be free food,
Time for a bulldozer to level it during the day.

Wow, this is BIG! Best of luck to the Mystery Vlogger who dug it up. Great work.

Holy cow! What a great job of exposing this for all of us. Please be very careful. I do believe these people criminal thugs and we know they are capable of great injury and/or death! Bless you. Thank you.

Maybe Ted Wheeler can move in there. I hear he’s looking for a new place.

Cluster and napalm munitions. Major problem solved. Not one would be missed by any decent citizen.

Paula A Cather
Reply to  Andy

Bring in the helicopter gunships from Apocalypse Now.

Turn the fire hoses on them before they go on public. They need a shower!

We have far better gunships today!????

They should be surrounded by the reserves with their guns drawn. Watch the rats pee themselves! Put them in a special camp away from the public so they can’t start more trouble. Like the middle of the desert. Just saying!